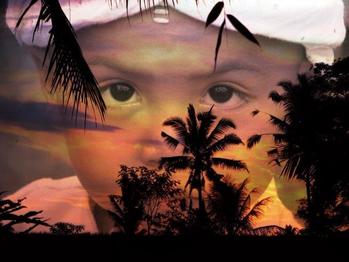 Ubud is located 35 km northeast of Bali's International Airport, about one and a half hours drive depending on traffic. Famous for its painter's community, Ubud is special in more ways than one. It has its own magic, and its particularly beautiful surroundings and gracious way of life have drawn celebrities and artists from all over the world in recent decades; some have even adopted Ubud as their own home. If I have to describe Ubud Bali in one word I would say "idyllic".

Despite the large numbers of tourists visiting this little village with streets that are too narrow for touring buses, Ubud has been able to maintain its traditional life. It is the meditation capital of Bali, many people come here purely to recharge their batteries from the past paced western life, here you just surrender to the energies and let go.

Ubud has been voted the top city in SE Asia in January 2010 by the Condé Nast Traveler, plus in April 2016, it has been voted on Tripadvisor as the 5th most popular island in the world...it is not hard to see why; everywhere you look is paradise with dense green jungles, myriads of rice fields and beautiful tropical gardens. Here Balinese men and women still place offerings gracefully on the side of the road and on temples; every day you will see them riding beautifully dressed on motor scooters to temples and ceremonies while holding colourful woven baskets, sometimes you can witness even up to four on a bike.

This is not a village were you should be up and running...the order of the day is to RELAX and live in the NOW. It is more a place where you'll want to stroll around or just sit with a book and watch the colourful and delightful pictures pass by. If you can’t resist some action though, there is the Monkey Forest where you’ll be greeted by the many Macaque monkeys, they are quite friendly but please do not touch them or visit Ubud Market. This market is a maze of shops that sell everything a traveller in Bali can imagine…and more.

The village is surrounded by fertile land which has resulted in the beautiful rice field terraces you always find in travel and photo books on Bali. This is also an ideal location to explore the terraces yourself and take beautiful pictures while standing in the middle of the fields. In the past the rice fields and ideal irrigation systems have provided the people with a surplus in rice yields. With time to spare the king of Sukawati ordered the rice farmers to dedicate their time on paintings for temples and palaces.

From here an unique place has emerged into a painter’s village that has attracted many people, including foreigners who have played their part in forming various painting styles. It is not surprising to see that many artists feel at home in this village considering the mystical and inspiring setting. Today painting still plays an important role in Ubud and around. There are many galleries where painters sell their work. Additionally there are several important art museums that show unique paintings that will create even more appreciation for this form of art.

You can continue your cultural adventure in the evening where you can choose from many Balinese performances such as the graceful Legong dance, the cool-looking Kecak-trance dance and the funny Wayang Kulit shadow puppet plays. This is a great way to end your cultural day experience in Ubud Bali followed by a good glass of wine or a local Bintang in one of the many flower garden restaurants.

In the eighth century, a Javanese Buddhist Priest, Rsi Marhandya saw a distant light rising from the earth to the sky and returning again. So Rsi organized a large group of men and women to find the place which was the source of the light. On this first journey he found a beautiful island as we know now as Bali. By the time Rsi and the search party eventually reached the mountains they came across Taro (30 minutes from Ubud) where he and his men fell ill and many died, they returned to Java where Rsi had another vision, regrouped his men and set out on his quest again. After a long journey he finally found the place of the light in the central mountains of Bali, Ubud and this time built a sacred temple on the site.

On the journey, Rsi was led to stop and meditate at a place where two rivers met. It was at Campuhan (which actually means two rivers meet) that Rsi Marhandya received the inspiration he needed on how to build what is now one of the most revered and beautiful temples in all the world. He meditated at the confluence of the two Wos Rivers at Campuhan, just west of the modern day town centre.

To mark this place of holy inspiration, a small temple was built on the banks of Campuhan and the surrounding land granted to the royal family of the town near Campuhan and refers to the healing power of this most sacred ground.  Ubud means Medicine in Balinese, Ubud was originally called Ubad and was revered as a source of medicinal herbs and plants. Tjokorda Raka of the Ubud Royal family has had a dream of opening up this and sharing the rejuvenating life of this place with visitors of other cultures.

A shrine was established and later expanded by Nirartha, the Javanese priest who is regarded as the founder of Bali's religious practices and rituals as we know them today. Campuhan has continued to be a source of light and inspiration for many, attracting artists and musicians of worldwide notoriety such as Walter Spies, Rudolf Bonnet, Colin Macphee, and Noel Coward, last but not least in this line was Antonio Blanco.

OTHER TEMPLES OF INTEREST 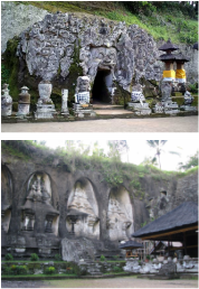 Further temples and monasteries were established over the next 400 hundred years or so, the ninth century cave temples at Goa Gajah, the famed Elephant Cave (just east and northeast of Ubud), are architectural remains from this period and many of the dances, drama and rituals still practiced in Ubud today, originated at this time. King Airlangga ruled all of Java and Bali in this era, and his seat of government was located in what is now the village of Batuan, just southeast of Ubud.

Another beautiful temple built around this time was Gunung Kawi, an 11th century temple complex in Tampaksiring north east of Ubud in Bali, Indonesia. It is located on the river Pakrisan. The complex comprises 10 rock-cut candi (shrines) carved into the cliff face. They stand in 7m-high (23 ft-high) sheltered niches cut into the sheer cliff face. These monuments are thought to be dedicated to King Anak Wungsu of the Udayana dynasty and his favourite queens. The Javanese Majapahit kingdom conquered Bali in 1343, and the key final victory was against the Pejeng Dynasty centred at Bedulu, just to the east of Ubud. A great flowering of Balinese culture followed, and the ancestry of Ubud's current day aristocratic families can be traced back to this period. In the sixteenth Century, there was a total transplantation of the Majapahit Kingdom to Bali as the Islamisation of Java forced them eastwards. Power flip-flopped between various dynasties and feudal lords, but the Ubud area remained a very important cog in the various regencies which ruled the island.